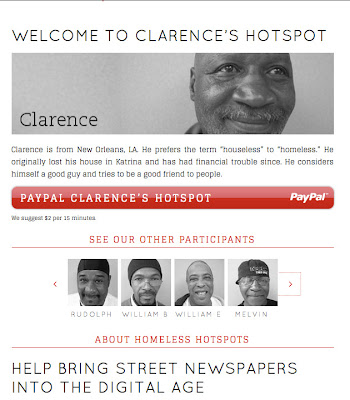 BBH, in a charitable effort meant to help the homeless, is renting them out as wireless hotspots at SXSW. It’s called Homeless Hotspots. The agency sees this as an attempt to “create a modern version” of the “Street News” model, in which the homeless community reports, writes and publishes a print product.

Jon Mitchell at Read Write Web sees it another way.

There’s a wee little difference, though. Those newspapers are written by homeless people, and they cover issues that affect the homeless population.

By contrast, Homeless Hotspots are helpless pieces of privilege-extending human infrastructure. It’s like it never occurred to the people behind this campaign that people might read street newspapers. They probably just buy them to be nice and throw them in the garbage.

Which is exactly what a lot of people do with Street News, BBH’s Saneel Radia told Mitchell. Radia said that content creation wasn’t the top priority—social engagement was. In other words, by making homeless people purveyors of the one thing that SXSW attendees want above all else—a working Wi-Fi connection—they become visible members of society. And the “hot spots” keep all of the proceeds.

Using the homeless for such self-promotional pap is tired and offensive. Only culturally clueless hacks employ these types of tactics while boasting to embrace the spirit of art, innovation and advocacy. It’s obscene exploitation perpetrated by the privileged. Nothing more.

And in this particular case, it’s even worse.

In 2009, New York City hosted the Diversity in Advertising Career Day, an opportunity for agencies and candidates of color to connect. Bartle Bogel Hegarty allegedly set up an empty table with a sign requesting job seekers simply drop off résumés. In short, BBH isn’t interested in hiring minorities. However, BBH is thrilled to take advantage of homeless minorities to hype the agency’s creativity. Maybe they’ll produce a companion TV commercial and cast Ted Williams as the voiceover. Sorry, but this pitiful act is a new low for White ad shops on Madison Avenue.

BBH should expand its masthead with an additional B—for Bigots.